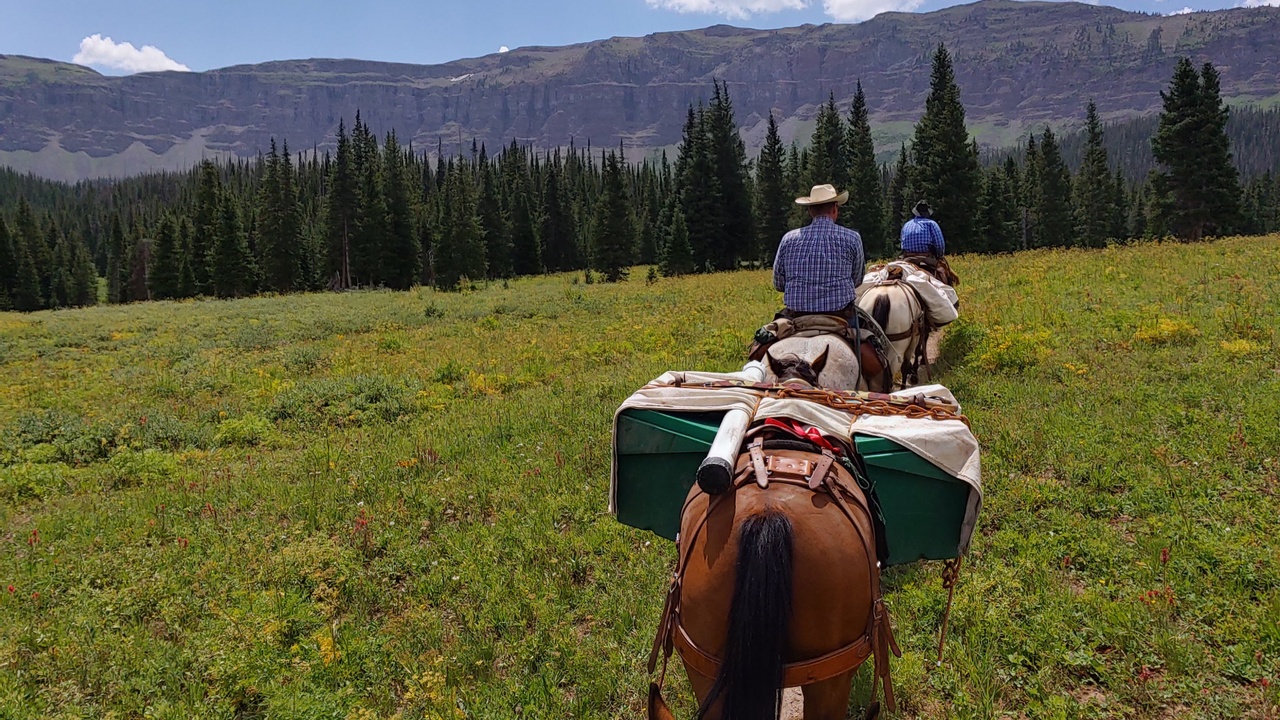 A class on horse packing?

I was stunned to hear such a class existed, and was open to freshman. Even still, I wasn’t entirely sure what the class would entail. My brother and roommate were teaching assistants and described how you’d learn how to pack 150 pounds of gear on horses, so that you could ride in and camp in the back country with horses. Oh, and the class ended with a three day pack trip in the mountains. Soon my laptop screen read:

Congratulations, you are successfully enrolled in ANEQ102: Horse Packing & Outfitting

I sat in the classroom on the first night of class, nervously wondering what I got myself into as the professor was nowhere to be found. Ten minutes later a man in his fifties arrived half disheveled and half excited. Sandy red hair was tousled above his sun beaten face and his plaid shirt was as worn as his Wranglers. I thought he might be a student until he wrote his name on the chalkboard and introduced himself as the class instructor.

No syllabus was handed out. There were no lecture slides. Instead he launched into an impromptu welcome that held more stories from his horse-packing experience than details on the class. His likable bravado was akin to a Hollywood actor, but his calloused hands and limped gait revealed his true colors. I guess a class unlike any other required a teacher unlike any other.

For the next three months we met on Thursday evenings for three hours. Our instructor would bring in his quirky and likable mules and horses for us to practice packing on. We learned the bowline, the sheep bend, and a handful of other knots and hitches required to secure the heavy and awkward loads to the backs of our pack animals. Having never been a part of boy scouts, my knot game was...lacking. Repetition became my best fiend, as I repeated the hitches in hopes of learning this new skill that required an engineer’s ingenuity and a stockman’s common sense.

Two weeks before the end of the semester we went on the three day trip that the class was building towards. Twenty five people and close to 50 horses ventured up to the Wyoming border where we employed all the skills we were supposed to have gained throughout the course. Packs slipped off, horses bucked, and the nights were below 20 degrees. Even still, it provided the hands-on crucible that most classes lacked, and was fun enough for me to be a teaching assistant for the class for another three semesters.

After I graduated, horse packing was slowly replaced like the faded sweatshirt in the back of your closet. Fly fishing and roping were accessible and addictive hobbies, and I didn’t own the gear or enough horses to make packing realistic. Years went by without doing it, and I looked back at my time learning the skill as a bit random - more a setting to hang out with friends than the learning of a lifelong valuable skill.

Thirteen years later I ate steak with two of my friends at an alpine lake after the three of us horse packed in. They asked how I learned about packing and I recounted the story, ending it with a cynical quip about how random that stint in college felt to me now.

“Nothing is wasted in God’s economy,” my friend replied.

At first his words felt too strong. Would I really describe that part of my life as wasted? Probably not, but I would chalk it up as a random exploring process. His words invited me to look deeper into that space.

I went on two pack trips this summer - one for Restoration Project and another with friends. Hindsight now sharpens the focus on that time in college as a time that equipped me with a skill I could use for work and provided me a space that was renewing. But God’s graciousness goes beyond the transactional acquisition of a skill that will be beneficial in the future.

Now when I think about taking a class on horse packing, I see beyond the charismatic unconventional instructor. I see a lanky 19 year old with hope not yet scarred. I see my need for a space to be tested, grown, and affirmed. And now I see God’s generous and kind provision for that space - in a course on horse packing of all places.

Are their parts of your life that you’re tempted to discard as random? What might it look like to re-examine those stories for God’s presence and provision?